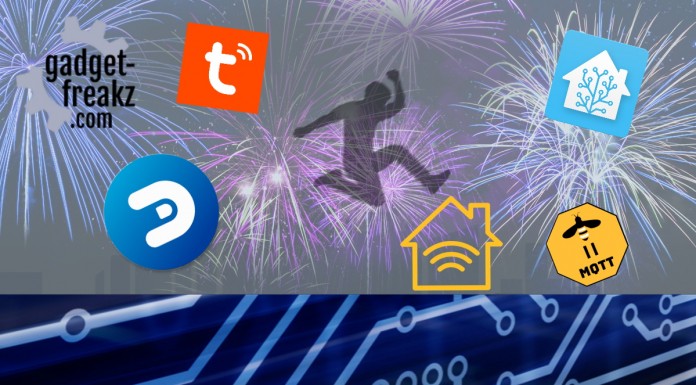 Although this year was not the best year in many ways, 2020 for Smart Home has actually brought us a number of positive things. People spend more time at home and therefore investing some time and money in smart home technology became more worth the effort and resources. A big winner was Tuya: even though it is far from perfect, they have gained a lot of market and you can now find Tuya compatible products in a large number of your local stores. The big off the shelf players like Google and Philips Hue have extended their product assortiment. But next to that, also our favorite Smart home platforms Home Assitant and Domoticz made some big improvements. In this article we will discuss a number of these developments.

During the last year Domoticz released a number of big updates, both within the core of the software as in the supporting apps, like the december release of their Android app. Some of the updates where as radical that they in some cases even required a new install. They gained a number of new users and were able to attract a numbers of new developers, which is always good for a community. However, Domoticz seems to have lost also some long time users to Home Assistant. Possible causes for this are lack of a publicly available roadmap and less focus on marketing and documentation (the new site has been work in progress for a while). They keep struggling to communicate their proposition, which can become a threat for the platform. Having a good product without the (potential) users knowing will make the scope of the product eventually limited, because you need the user feedback. Especially when there are other players around that do a better job at communicating that value.

Our latest articles on Domoticz:

One of these other players is Home Assistant. They gained a lot of market last year, in every form. Proof of this can be found in all the social communities: the Facebook groups, fora, GitHub repositories and Discord channels. During one of their hosted events, Home Assistant proudly presented that they are the biggest Github project. This is especially remarkable since Home Assistant consists of a number of separate Github projects, for example: Front-End, OS, Android App and documentation.

Besides the volunteers that keep the development and the community of Home Assistant going, are also a number fulltime developers. They give all the projects a boost and help other by providing structures and frameworks that greatly benefit others by giving them a running start.

The biggest tangible improvement in Home Assistant the previous year is definitely the Blue Enclosure: a piece of hardware that runs the Home Assistant software. Lots of HA users are started with running the software on a Raspberry PI. The more tech savvy and power users later upgraded to a Virtual Machine in ESXi of Proxmox to run there software. The Raspberry Pi is powerful enough but there is a bottleneck. When adding lots devices or Add-ons in Home Assistant, this will result in a huge amount of writes to the only storage of the Pi, which is an SD card. And an SD card only has limited writes before it wears out and data gets corrupted. By using virtualization on for example and Intel NUC this bottleneck you can prevent this problem. But not everyone has the time or skills to get an Intel NUC and get virtualization software up and running. Luckily, there is the Blue Project. For this, Home assistant partnered with Odroid and there is a device that contains a virtual installation of Home Assistant that is ready to use! Home assistant preloaded, onboard and start!

Our latest articles on Home Assistant:

We are a fan of Tuya, since it brings Smart Home to the masses without the investment in either a hub or a montly fee. Next to that: you only need a single app to manage the smart devices where you previously needed almost an app per device. That’s why we wrote our ultimate Tuya guide to get you started with Tuya. First the positive developments: more and more Tuya devices are available now, and they can even be found in your local store. If the product contains a Tuya logo you can add it to the Smart Life app. So since they are affordable, everyone with an internet connection can make their home smart by buying Tuya compatible lamps, switches, sensors and cameras.

However, some of the developments on the platform are worrisome. First of all: somewhere in the start of this year, the Tuya stopped supporting the use of IFTTT. According to Tuya supporting it became to costly and the functions were also available in the platform. Our concerns are not with the functionality of IFTTT, but that they just can stop supporting functionality that was previously available. In theory they can do the same for other third party software and devices.

Tuya is here to stay and it is becoming bigger every year. And more people depend on their technology. However, in november there was downtime of the Tuya network caused by an outage on the AWS platform. While the use of the platform is free (however: does free exist?) and it was unlikely that AWS would have an outage like that it still gives to think: the control of your smart devices at home is somewhere in a data center. And if it is down, you cannot switch your devices on or off. And while you could use Tuya Convert to get the devices out of the cloud, Tuya seems to be preventing this in the firmware of the newer devices.

Zigbee is the open standard protocol for wireless connections between devices at short distances, and is being used a lot by Smart Home manufacturers. If you want more information, please check out the Zigbee starting guide we posted in October of this year. Over 2020, Zigbee became bigger in many ways. Xiaomi pushed some new devices and the other big Smart Home brands like Philips, and Ikea did the same. Even stores like Lidl introduced their own product range. Almost every brand introduced a Zigbee Hub in their product range. But most of these hubs have limitations to Zigbee devices that can be added, and in most cases they are limited to the brands own devices.

But thanks to the Zigbee2MQTT brand you can buy Zigbee devices from every product and brand you want and use them with your own DIY Zigbee Hub/gateway/bridge. There are a number of hardware options to get you started, so you can choose a budget Zigbee stick with or choose for a more premium stick with better range and more features.

A 2020 for Smart Home highlight is definitely Zigbee2mqtt. This platform became mature and rock stable. In 2020 it got an own webbased front-end, so devices are easier to manage. Also, stable firmware for Zigbee 3.0 was released. Talking about firmware: compatibality was added for cc2652 and even the ConBee stick. And of course, support of lots of Zigbee devices was added.

However, over 2020 Google Home became more mature and the biggest changes were: